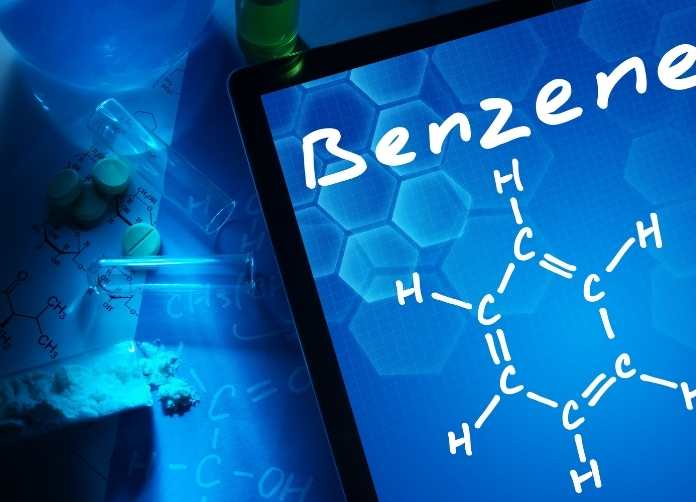 Benzene is a joint but highly toxic chemical compound usually found in gasoline, diesel fuel, and other petroleum products. The Department of Health provides tips to stay safe when working with benzene. Benzene exposure is most toxic when inhaled, then slowly absorbed into the bloodstream. The elimination of benzene from the body is complicated and can take years to clear from the system. Therefore, the most dangerous groups regarding benzene exposure are those with pre-existing conditions, like heart or blood disorders, and pregnant women. The reproductive effects of benzene exposure have also shown that it may hurt newborns and children born to exposed mothers. Aside from these health risks, low levels of benzene exposure can lead to

Higher levels will cause:

Have You Been Exposed to Benzene?

Benzene is a colorless, highly flammable liquid with a sweet smell. It is used to manufacture many products, including gasoline and other fuels, cleaners such as paint thinner and degreasers, industries such as plastics and paper production, and drugs. Benzene can be found in trash cans around your home or workplace. Benzene is also found in everyday products such as gasoline, paint thinner (paint stripper), ink cartridges, and medications.

Yes. Benzene is highly toxic. Its effects on the human body are caused by its impact on the bone marrow, which produces blood cells. Losing red blood cells, known as anemia, lead to weakness, fatigue, and pale skin. Damage to the white blood cells can result in a sore or swollen mouth and fever. In addition, if a person breathes in benzene for many years, it can cause leukemia and other cancers. According to Benzene FAQs, there have been known cases of leukemia that started with exposure to benzene.

Where Can Benzene Be Found?

Benzene can be found in numerous household products, industries, and more.

In your water supply and natural gas lines, benzene has been found at levels higher than what health officials consider safe. Benzene is released from many petroleum products during the production process, and the benzene in your home can come from various sources. According to Benzene FAQs, benzene is found in gasoline, paint thinner (paint stripper), ink cartridges, and medications.

Benzene is found in many household products, including:

Air fresheners and scents sometimes contain benzene or other hydrocarbons that can result in adverse health effects such as headaches, fatigue, dizziness, and memory loss. Benzene is present in many household products and products used outdoors, such as bug sprays, détergent, and laundry detergent.
Cars and Trucks.

If you drive a car or truck, it's possible the fuel you burn contains benzene. Even gasoline from gas stations can contain benzene or other hydrocarbons that can harm you if inhaled or ingested.

What are Benzene Exposure Symptoms?

There are many symptoms of benzene exposure, so let's review them.

The most apparent symptom of benzene exposure is a sore or swollen mouth. The symptoms can appear within minutes after exposure and last for many hours. Blisters and ulcerations appear on the gums or inside the mouth, which may accompany vomiting, diarrhea, fever, and headaches. As the damage worsens, the mouth may become dry and painful.

The most severe effect of benzene exposure is called "acute blood toxicity," a blood disorder that causes bone marrow and blood cells.

The bone marrow, which produces blood cells, can be destroyed. The later result will be anemia (a low number or absence of red blood cells), leading to weakness, fatigue, and pale skin. The bone marrow can also be damaged in a way that causes many white blood cells to develop abnormally, resulting in fever and pain in the mouth and gums. The bone marrow may also become inflamed, called "myelophthisis." If left untreated for an extended period, acute myelophthisis might eventually cause severe anemia or leukemia.

What is Benzene Used For?

Some industries use benzene to clean floors and equipment because it evaporates quickly and leaves no residue. It is also a spray-on rust remover commonly used on cars or trucks. In addition, benzene is sometimes used as a solvent (a liquid that dissolves other substances) to dissolve certain substances like rubber or plastic coatings on electrical wires. It is also used as a solvent to remove rust from metal screws and bolts.

Synthetic drugs are made by mixing several chemicals that affect how the body works. Benzene is one of these chemicals. The chemicals it's made of are similar to those found in meat, fish, or dairy products, which can be harmful when combined with benzene. Benzene was used as a medicine until it was replaced with safer alternatives because benzene was known to cause health problems when injected with other drugs, including penicillin.

What Types of Cancer Does Benzene Cause?

Benzene has been linked to a couple of severe types of cancer:

Acute lymphoblastic leukemia is a type of cancer in which the white blood cells in the body grow out of control, resulting in many dangerous and possibly fatal health effects. These white blood cells are not removed and broken down as usual, so they build up in the blood and bone marrow. This cancer is treated with chemotherapy and can be fatal if left untreated. Benzene may be a factor in developing acute lymphoblastic leukemia for children who are 15 or younger who are exposed to benzene because of their small size.

What is Benzene Poisoning?

While benzene exposure can cause cancer, you can also get benzene poisoning from:

Acute exposure to benzene is a type of poisoning that occurs when you are exposed to high levels of benzene suddenly, usually from an accident or hazardous exposure. The symptoms include:

The effects can be treated if detected early with supportive care (drugs, fluids, or other therapies to improve the patient's general condition and comfort).

Chronic exposure to benzene is a type of poisoning caused by repeated exposure to benzene over a long period. Symptoms include headaches, dizziness, fatigue, and abnormal behavior like depression, anxiety, or paranoia. The effects can be treated with supportive care if detected early with symptoms that you need treatment. Chronic exposure is not the same as "chronic" exposure.

Who is at Risk of Benzene Exposure?

Industrial workers exposed to benzene are at a higher risk of developing chronic, low-dose, or long-term effects of exposure, depending on the type of exposure they experience. In addition, because the impact can take years to develop, first responders and emergency medical technicians may be at even higher risk.

If you lived or worked at Camp Lejeune between 1953 and 1987, you may have been exposed to unhealthy levels of benzene in your drinking water. There are many Camp Lejeune lawsuits going on, and we can help evaluate your case.

First responders and emergency medical technicians exposed to benzene on the job may develop chronic, low-dose, or long-term effects of exposure.

Benzene is a common chemical that's used in many industrial processes. As a result, people who work in industries that use benzene may be exposed to higher levels of benzene.

People who live near oil and chemical storage facilities.

Living near a benzene-storage facility can increase your risk of exposure to high levels of benzene because it is more likely to leak into the air.

Benzene FAQs are updated regularly to have the most recent information from reputable sources and health professionals. The information provided here is for general purposes only. It does not replace advice from a doctor or other medical professional. If you have any questions or concerns, it is always best to speak with your doctor, nurse, or pharmacist.

Have You Been Exposed to Benzene?

If you have been exposed to benzene and diagnosed with benzene poisoning or cancers related to benzene, you may have a case. Call our personal injury lawyer today for a free case evaluation.