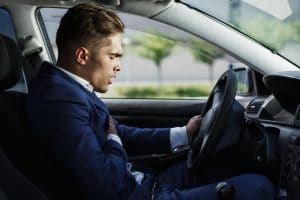 Liability for car crashes caused by medical emergencies ultimately depends on the circumstances surrounding the car crashes and preceding events. For example, we must determine whether the medical emergency happened suddenly and unexpectedly. If the medical emergency indeed happened unexpectedly, such as a driver losing consciousness from a sudden heart attack, the driver can’t be found liable since he or she didn’t have time to react, nor any previous experiences of losing consciousness.

If the driver who experienced the medical emergency causes a wreck, he or she could use the “sudden medical emergency” defense option. This option allows the responsible driver to say he or she wasn’t negligent. However, he or she must provide proof that the crash could not have been prevented.

For example, say the driver has a preexisting condition which causes him or her to occasionally experience blackouts. These blackouts are always preceded by certain symptoms, such as tunnel vision, a certain kind of headache, or maybe a ringing in the ears. The driver, therefore, should be able to recognize the symptoms of the oncoming blackout and pull the car or truck over. If he or she doesn’t, then the driver could be held liable for the crash.

Claiming damages for a collision caused by a medical emergency

If the driver successfully proves he or she suffered a medical emergency, and that the emergency could not have been foreseen, you won’t be able to sue that driver for damages. Instead, you may have to rely on your own car insurance to cover the costs of your claim. If the driver is unsuccessful in proving his or her case under the sudden medical emergency defense, then the driver’s insurance company should pay for your claim, just as it would in any other type of collision.

Determining who is liable for car crashes caused by medical emergencies depends on the circumstances, but foreseeability is an important component. Mezrano Law Firm helps Alabama clients who have been hurt in car crashes, no matter what the cause. To schedule a free consultation with an Alabama car crash lawyer, call us at 205-206-6300 or fill out or contact form. We have offices throughout Alabama, including Birmingham, Florence, Gadsden, Mobile, Montgomery, and Tuscaloosa.