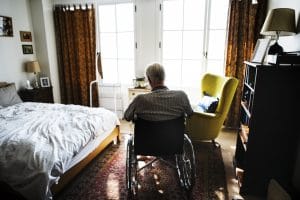 A nursing home was the worst place to live in the height of the COVID-19 pandemic. Whether it was in New Jersey, New York, Pennsylvania, California, or any other state, nursing homes were hit incredibly hard by the virus. Veterans’ homes had it even worse.

There are 150 veterans’ homes across the country. In those 150 homes, thousands of residents were stricken with the virus, and hundreds died from it. In an expose by the Wall Street Journal, the Bill Nichols State Veterans Home in Alabama was evaluated for it being a large hotspot for the Coronavirus. Of the 150 residents living there during the pandemic, 96 tested positive for the virus, while 46 died from the virus.

The first resident at the Bill Nichols Home tested positive for the virus on April 8, 2020. Positive cases then began appearing on multiple floors of the facility, which led to the Alabama governor sending in the state’s National Guard to spray the rooms, common areas, and offices.

The first known death at the veterans home occurred on April 22 when 74-year-old Herman Hackworth passed away from the virus in a memory ward of the facility. “The right side where Herman was, these people were supposed to be asymptomatic. They weren’t supposed to have any problems. We knew. We knew it was Covid,” said Mrs. Kynard-Hackworth. “I feel like I was deceived until the day I went and saw for myself.”

She called an administrator at the facility the next day in anger. The administrator finally admitted to her that her husband had COVID-19. Her husband passed away from the virus later that afternoon.

Bill Nichols cited prior to the pandemic for poor care

The Bill Nichols facility in Alabama was cited for violations, and for abuse and neglect of its residents, in years prior to the pandemic. Those citations were issued by state health inspectors for hygiene issues in 2019, 2017, and 2016. One specific inspection from August of 2019 revealed an issue with the quality of care and an issue of verbal abuse. The quality of care issue stemmed from an employee failing to administer medication, which led to the resident being hospitalized. The verbal abuse issue led to the employee’s dismissal.

According to family members of residents at the Bill Nichols facility, the staff was slow to identify which residents had the virus because of a shortage in tests. Family members also noted that the staff failed to effectively separate residents who tested positive from those who had yet to test positive for the virus.

The son of one resident said that he had no idea his father had the virus until he received the bill from the funeral home.

Clarence John Hill Sr. died on May 5 at the home from the virus at the age of 95. His son, Clarence John Hill Jr. said that there was a line item on the bill from the funeral home charging for the transport of someone who tested positive for the virus.

“Why did it have to happen like this?” asked Mr. Hill. “We didn’t even have an opportunity to even say, ‘I’ll take the chance of catching Covid myself. Let me see my father before he passes away.’ He died alone and the next time we saw him he was in a box. To fight for this country and you treat them like this. How? How can that be right?”

Scott Hurst is a regional vice president for HMR of Alabama, Inc., which is a private contractor that operates the facility for the state of Alabama. “The staff at Bill Nichols State Veterans Home has been working tirelessly and with the support of so many others caring for our country’s veterans during this pandemic,” Hurst said. “While we are blessed to have helped many recover, we have also had heroes who have succumbed to this illness.”

Why were veterans’ homes struck so hard?

The Department of Veterans Affairs provides annual funding to these homes across the country. In 2019, a total of $1.17 billion in funding was distributed to assist in the care of more than 20,000 veterans living in those homes. So you would think that there would be plenty of help available to the men and women who put their lives on the line to protect our country.

Sadly, that turned out not to be the case.

When the pandemic struck, these homes were already understaffed, had limited access to tests, and had very little personal protective equipment. Making matters worse, residents living in veterans’ homes are highly susceptible to contracting COVID-19 because of their medical condition, their age, and the close living conditions.

Did you suffer the loss of a loved one in an Alabama veterans’ home during the COVID-19 pandemic? The experienced and compassionate team of nursing home abuse and neglect attorneys at Mezrano Law Firm fight vehemently for those who have suffered abuse at the hands of those who work in nursing homes. We will fight for your right to compensation for your injuries or for the loss of your loved one. Call our office at 205-206-6300 or complete the contact form online. We represent clients in Birmingham, Mobile, Florence, Tuscaloosa, Gadsden, and Montgomery.